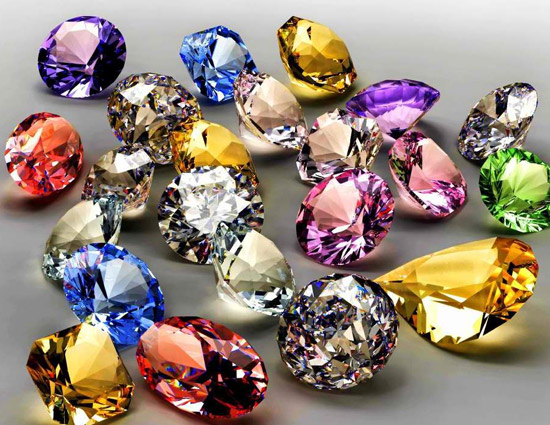 The Christian Church believed that the works of ancient astrologers were pagan superstition. Therefore, during the development of Christianity, a huge number of printed works of the ancient authors mercilessly destroyed the impact of precious stones on the fate and health of people.

The very first (from the remaining sources) were translations from Sanskrit of the ancient Indian lapidary (books of precious stones) of the 5th century, where it is told about nine gems, which according to the ancient Hindus, are carrying out the astral, invisible connections of the Earthman to the Galaxy and the earthly universe: the onyx, coral, chrysoberyl, topaz, zircon, emerald, sapphire, ruby and of course diamond.

In the Middle Ages, Christians again became interested in the mysterious omnipotence of precious stones. Astrologers of various countries compiled a large number of calendars of precious gems, in which advice was given on the time of their wearing. This trend has appeared in Russia.

For example, in the book “Instructions on precious gems, and a method with their help to make sentences,” which was compiled in the 19th century by Prince Dolgoruky Andrey, based on the manuscript of Zosima, the 7th-century astrologer tells us which gems are prescribed to be worn in specific days:

There are calendars that show the seasons when precious stones are made of strong and powerful amulets. One of the calendars, compiled by the Archbishop of the Rhine Marbrod, says the following:

The archbishop used the most ancient sources and in addition to the gems calendar wrote a treatise in Latin, where he described in detail about 70 minerals – their healing and magical power, appearance, places where the stone is mined.

READ  How much UK tax would Google pay if it recognized all UK income through Google UK Ltd?

The first Christian priests, though ruthlessly destroyed many valuable literary rarities, themselves collected a list of precious gems, each of which was tied with one of the apostles (John – emerald, Peter – Jasper, etc.) It turns out that they are still themselves were not completely convinced that the faith of many people in the magical power of gems is such a relic of the past.

Astrologers (ancient and modern) have a firm conviction that the influence of gems on human destiny and health is predetermined by the arrangement of the constellations of the zodiac and the planets. The best for people will be those precious stones that are directly related to the sign of the zodiac, under which man was born. The mystic from France, the mystic astrologer XIX century Levi Eliphas and (Constance Louis Alphonse) in his work “Stones – a living thing” classified the precious stones that are associated with specific planets as follows:

The work, similar to the work of Levi, was created by a large number. The Soviets were sometimes directly opposed to each other (after all, as now, astrology was loved not only by real scientists but also by rogue charlatans). And finally, at the beginning of the 20th century, the National Association of Jewelers at its congress corrected and unified the list of precious stones of the months of birth and correspondence to the signs of the zodiac.

Today, everyone knows that the constellations and planets influence the human being in one way or another, but also the moon – the moon. The attraction of the Moon is expressed not only in tides but also an influence on man. It turned out that precious stones perfectly neutralize its negative influence and strengthen the positive influence. In China, from ancient times, it is believed that all the inanimate nature (gems including) are subordinated to the Moon. Chinese astrologers say that on the appointed days the power of the magic of crystals decreases or increases, under the influence of the night light.